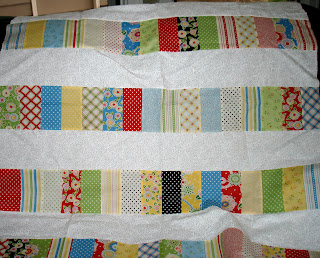 In honor of National Quilting Day (March 21st), I put together this stacked coin. It still needs to be quilted, which I'm hoping to get to this week. I like how it looks. Everyone else in the house isn't too sure about it. 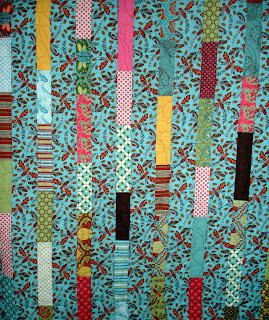 Finally got my Tula Pink Flutterbys quilted over the weekend. This was one of my shows from August 2008. I'm on a mission to get some tops quilted and finished. Too bad Peg isn't doing another Finish Five to get me motivated. 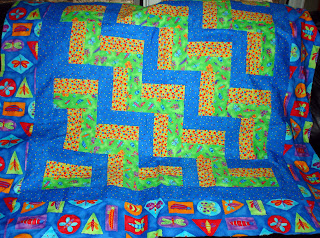 And this little beauty will go on Etsy once I have the binding on. The colors are really bright. This one was also quilted over the weekend.

Have a great week.

What Month is This? 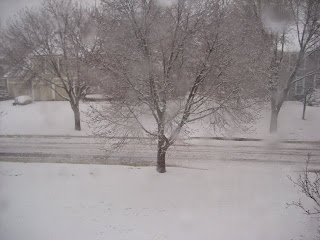 Looking out my upstairs window. Poor flowers. The pine trees are so heavy with ice. Great day for sewing though.

EDIT: 10:27PM The snow has slowed down. Still coming down a little bit, but not as bad as earlier. I think we ended up with 6 inches easily. It's wet and great for snowman making.

Tuesday night was guild night. Our guest speaker was Tula Pink. What an awesome meeting it was. It was fun to hear her talk about her designs, previous career and how Moda does things. I always feel so jazzed to sew when I get done with guild.

Below is Jenny (aka Tula Pink) talking. 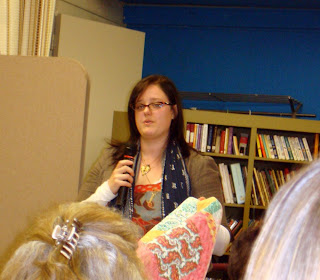 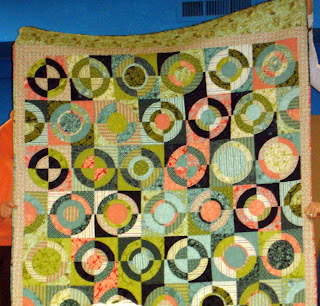 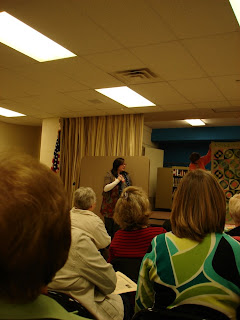 Very Very cool quilt. She whipped it up using rejects she received from the mill. Whipped it up - yeah made me want to whip her. Ok, not really. I wish I could have stuff like that just come flowing out of my head. Instead I have things like snot - Ok, I digress. 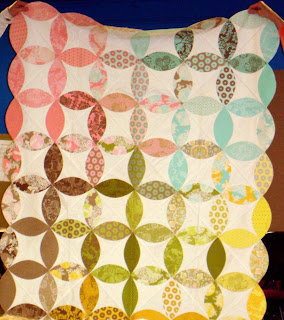 Grace went to guild with me Tuesday night. Dad wasn't feeling well, so I thought I would be nice and remove the small child from the house. Grace has her own camera and made sure to pack it before leaving the house. In her purse were some cool rocks that she got. A picture session .... 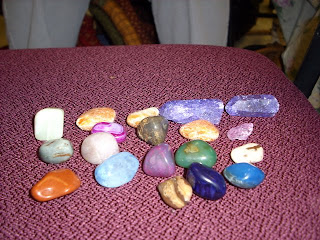 Jenny passed around "headers" so we could see a whole line of fabric at once. Grace thought they were VERY COOL. I heard lots of "mom I like that", "mom you need to buy that." Great - she won't be going to college because we are going to spend all of it on fabric. I guess there could be worse things to spend the important money on. 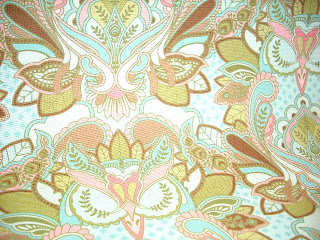 Last but not least - Buddy. Grace took this picture of him. It makes me smile every time I look at it. Looks like he's smiling. He probably just got done chasing Sissy (the fat cat that's thinning down) around. 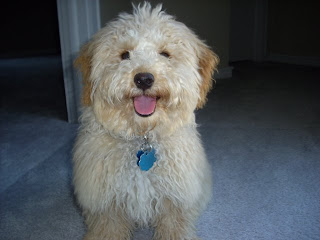 Have a great night!!!

I can totally relate to this little boy. I get CRAZY when they give me gas at the dentist. My husband said I refer to it as the WOOO-WOOO gas.

I hope this isn't too good to be true or that I'm too low on the scheduling list.

I was directed to this link in my reading this morning. Joanne over at Splitting Stitches has come up with her own stimuls package. She's offering very reduced prices for quilting. Even though I have a machine and quilt my own quilts, I definitely lack all the time I need to get everything done. Count me in.

I can't seem to keep up with any thing these days. Time gets away from me and I have no idea where it goes.

I have been busy work on things. The embroidery machine has been running this week working on burp clothes. A friend at work asked me to make some for her for a baby shower she's attending, so I made extras at the same time. 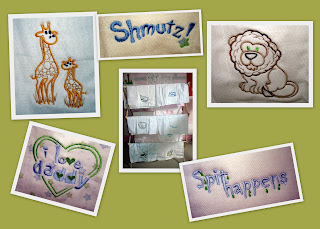 My intention is to spend the night in the Girl Cave working. More embroidery and a serious need for cleaning. 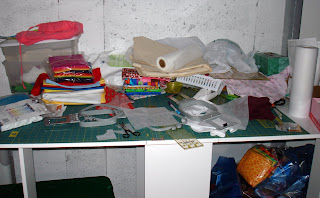 I hope spring is on it's way soon. This cold weather and the swings from very nice to frigid are really getting old.

Have a great weekend! 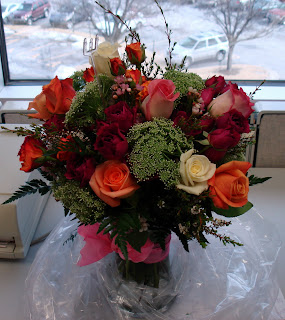 My honey sent me these beautiful flowers for my birthday and our anniversary. They are amazing. I wish I could capture the smell and share that with you too. I work in an office that has 2 big building. We have a security desk in one building and then just the various offices in the other building. The poor delivery guy just couldn't figure it out. He probably called me 5 times. The bad thing was I was on a conference call and couldn't get off the phone to see who kept calling. Long story short, he must have asked someone and they directed him to the security desk. The security guard that called me made a special trip over to my desk just to look and smell the bouquet. 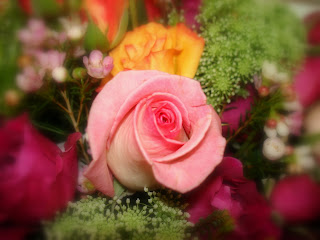 One of the beautiful roses. I was having fun playing with Picasa using the effects. This is a soft focus. 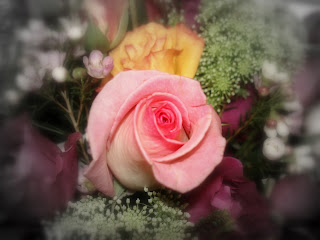 Same rose with B&W around the edges and the main flower in color. 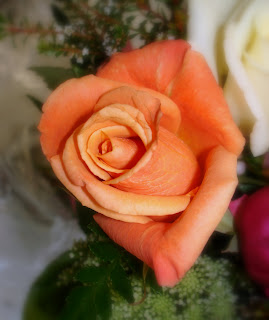 Soft focus I think. I tried a bunch of things and didn't like any, so I can't remember how I really saved the picture.

Our 18th anniversary is Sunday, so I think we are going out to dinner on Saturday night. Miss Grace is going to Papa and Grandma's house for the night.

Have a great weekend!

Whatcha' Been Up To?

I think I might have mentioned that I've been busy, but not a lot to show. Well finally I have some shows.

Over the weekend, I made bags and bags and more bags. I also made some patches and sewed them to cloth diapers to make burp clothes. In a mode of modesty - they looked GREAT!

Below is a stacked coin top that's finished. I used a pack of charm squares to make it. I think I might have to make another one and use something not so, well, RED! I'm hoping to get this puppy on the frame and quilted over the weekend. 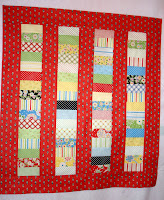 And Easter towels. I made the Valentine's towels which turned into a bigger hit than I had planned. Below are 3 of the many designs I used to do the Easter versions.

Tonight I took Grace swimming. The heat in the pool area was almost unbearable. I'm off to bed.

Have a great week! 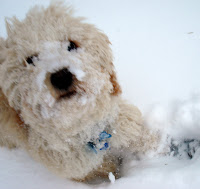